Home Archives Profile Subscribe
The Future of the Datacenter

For the last couple of years there has been a resurgent theme cropping up regarding disaggregation of components within a rack to support hyperscale datacenters. Back in 2013 Facebook, as founder of the Open Compute Foundation, and Intel announced their collaboration on future data center rack technologies.

This architecture deals basically with the type of business that Facebook itself is running and as such is very component focused such that compute, storage and network components are disaggregated across trays, trays being interconnected with a silicon photonic internal network fabric.

This has the advantage for hyperscale datacenters of modularity allowing components such as CPU to be swapped out individually as opposed to the entire server construct. Intel, presenting at Interop 2013, had an excellent presentation on the architecture outlining various advantages. This architecture is indeed being used by Baidu, Alibaba Group, Tencent and China Telecom (according to Intel). 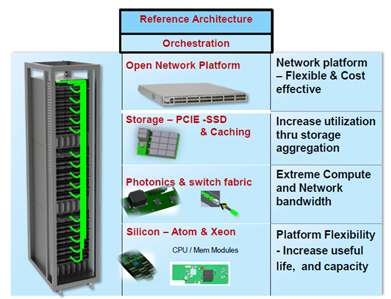 This in itself is not earth shattering, but seems to lack the added "magic sauce". As it stands this is simply a re-jigging of the arrangement of the form factor but in itself does not do anything to really enhance workload density outside of the consolidation of large numbers of components in the physical rack footprint (i.e. more core, RAM, network bandwidth).

Principally it is aimed at reducing cable, switch clutter, associated power requirements and upgrade modularity, essentially this increases the compute surface per rack. These are fine advantages when dealing with hyperscale datacenters as they represent considerable capital expenditure as outlined in the Moor Insights & Strategy paper on the subject.

Tying into the themes in my previous blog regarding the "Future of the Datacenter" there is a densifying effect taking place affecting the current datacenter network architecture as aptly shown in the Moor study: 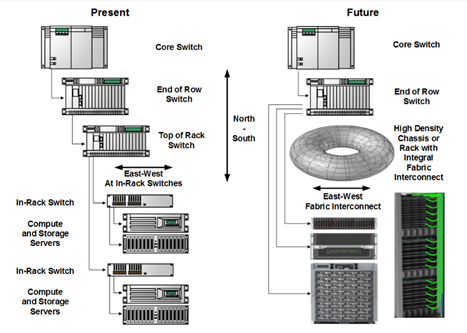 Examining this architecture, the following points stand out:

There is a lot of added value to be derived for an enterprise datacenter using some of these "integrated-disaggregated" concepts, but competing with and surviving in spite of hyperscale datacenters requires additional innovative approaches to be taken by the enterprise.

Enterprises that have taken on board the "rack as a computer" paradigm have annealed this with capability architecture to drive density increases up to and exceeding 10x over simple consolidation within a more capable physical rack:

The enterprise Datacenter can deliver value beyond a hyper-scale datacenter through thinking about continuous consolidation in line with the business not just IT needs that need to be delivered. Such platform and rack-scale capability architecture (RCA) has been proven to provide massive agility to organizations and indeed prepares them for new technologies such that they can behave like "start-ups" with a fast-low-cost-to-fail mentality to power iterative innovation cycles.

Opportunities for the CIO

The CIO and senior team have a concrete opportunity here to steal a march on the Public Cloud vendors by providing hyper-efficient capability architectures for their business in re-thinking the datacenter rack through RCA paradigms.

Not only will this massively reduce footprint in the existing premises and costs, but focuses IT on how best to serve the business through augmentation with hybrid Cloud scenarios.

The industry has more or less spoken about the need for hybrid Cloud scenarios where private on-premise cloud is augmented with public cloud capabilities. Further today's announcement with regards to the EU making "Safe Harbour" data treaty effectively invalid should put organizational IT on point about how to rapidly deal with these changes.

Industry thinking indicates that enterprise private datacenters will shrink, and the CIO team can already ensure they are "thinking" that way and making concrete steps to realize compact ultra-dense datacenters.

A hyper-scale datacenter can't really move this quickly or be that agile as their operating scale inhibits this nimble thinking that should be the hallmark of the CIO of the 2020s.

In the 2020s perhaps nano- and pico-datacenters may be of more interest to enterprises as way of competing for business budgetary investment as post-silicon graphene compute substrates running at 400GHz room become the new norm!